I was born in Edinburgh in 1961. My family moved to Manchester when I was four, but my early love for Scotland drew me back and I studied in both the ceramic and tapestry departments at Edinburgh College of Art in the 1980’s. I went on to study tapestry within the painting school at the Royal College of Art (at the time that Eduardo Paolozzi’s Tottenham Court Road tube station mosaics were being installed) and this was followed by a year living in Barcelona where I came across a very different type of mosaic adorning the buildings of Antonio Gaudi.

I first started to work with mosaic in the early 1990’s, undertaking several public art commissions for local councils, schools and hospitals as well as for private clients. My father (a consultant psychiatrist) had been an early protagonist of the Arts in Health initiative, championed in Manchester. Through this, I developed a particular interest in creating work for healthcare environments and worked on several award winning projects in the healthcare field. 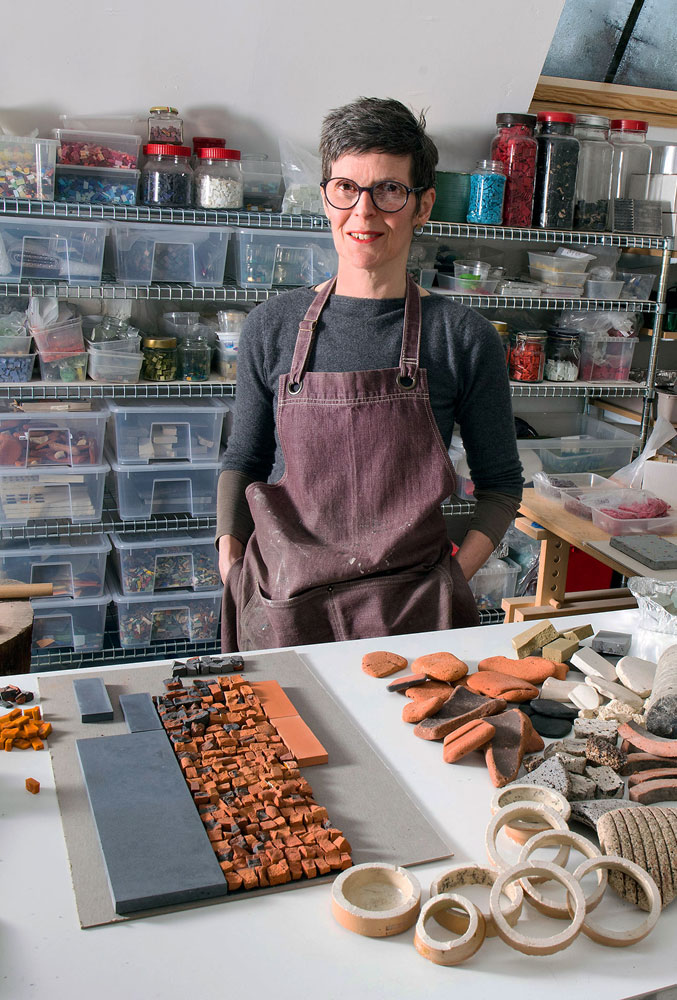 Arts Council England and Creative Scotland Research and Development Awards in 2007 and 2010 were pivotal points for me, and led me to re-connect with my studio based practice. I set up Edinburgh Mosaic Studio in 2009, and I now combine my own studio practice with teaching, research and commissioned work.

Annual trips to Italy since 2010 have provided the inspiration for much of my studio practice. Early research trips led to a specific interest in the work of the Venetian architect, Carlo Scarpa and his attention to detail and exquisite marriage of materials, from cast raw concrete to gold leaf smalti, has been an inspiration ever since. As a result of this, I have developed links with several Italian mosaic suppliers and with contemporary Italian mosaicists, ceramicists and sculptors. My work is recognised within the vibrant contemporary mosaic scene, and I run an annual residential mosaic course near Ravenna, forging new Italo-Scots links.

I am keen to promote contemporary mosaic as an expressive art form and have shown my contemporary mosaic artworks nationally and internationally. Since 2011 this has included The Scottish Gallery in Edinburgh (2017), London Design Fair (2016) and the mosaic Biennales in Ravenna (2013 -2017) and in Chartres (2014). In 2018 I received the prestigious Scottish Gallery award for (In)visible Cities: Interface IV on show at the Royal Scottish Academy ‘Together’ exhibition, showcasing work from Visual Arts Scotland and the Society of Scottish Artists.

I am a member of the British Association for Modern Mosaic (BAMM) and have been closely involved with its work. I served on the BAMM Committee, was responsible for organising the BAMM Forum in Edinburgh in 2017 and now act as Ambassador for the Association. I have also spoken at conferences in Italy and the UK about contemporary mosaic.

I am interested in mosaic as a contemporary craft rooted in history, the jewel-like qualities of hand-cut mosaic tesserae, the time it takes to create an exquisitely crafted object, the play of light on matt and reflective surfaces and the dialogue between the ordinary and the precious – from raw concrete to gold leaf glass smalti.

My current work, (In)visible Cities, is an ongoing series of mosaic and cast concrete pieces inspired by built environments and the work of the Venetian architect Carlo Scarpa. The series takes its title from Italo Calvino’s novel, ‘Invisible Cities’, and plays with the notion of what is / is not visible, exploring the intimate detail and beauty of unseen, ‘glimpsed’ spaces.

“The city… does not tell its past, but contains it like the lines of a hand, written in the corners of the streets… every segment marked in turn with scratches, indentations, scrolls”.

These contemporary mosaic artworks inhabit a space where craft-meets-art-meets-design-meets architecture. They bring together an interest in place (both imagined and physical), with a fascination in the tactility of materials and the evocative power of abstracted, simplified forms. In this way, the work presents a highly personal response to ‘place’, exploring the subconscious associations and memories evoked by the overlooked, hidden spaces we inhabit.

My work develops through a distillation process, starting from sketchbook drawings and photographs and gradually proceeding to collage with mosaic and Jesmonite panels. Even at the assembly stage, I make, unmake and remake everything a number of times before I feel I can proceed. This physical ordering and re-ordering of repeated elements within my work is an immersive process, which enables me to respond intuitively to material, colour, texture and scale, and to create something which captures, in abstracted form, the essence of the place which has inspired it. 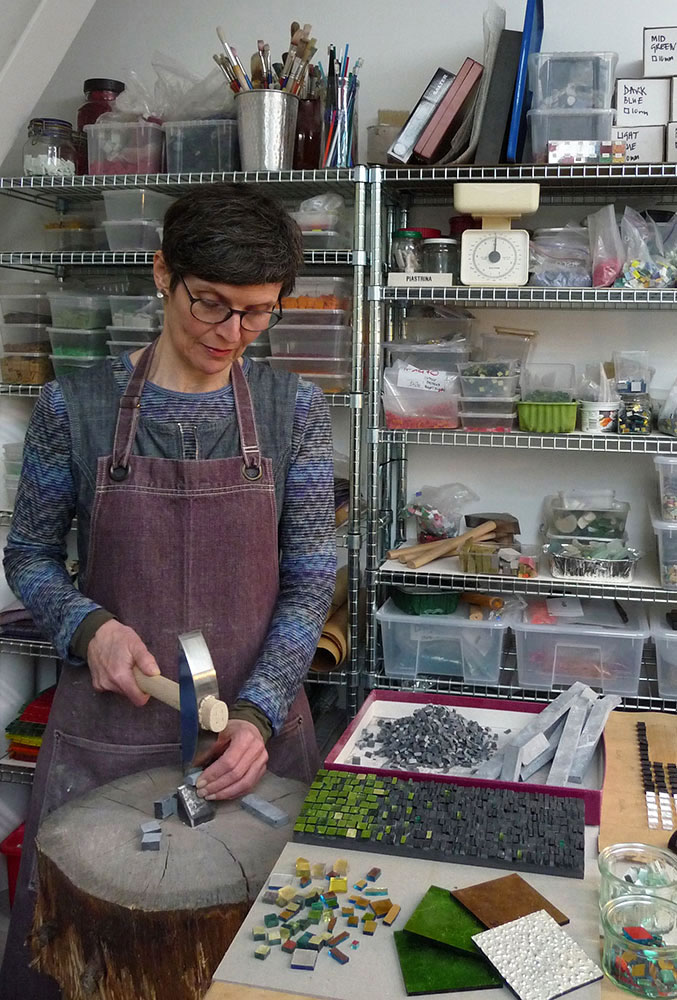